In web design, few terms see as much interchangeable use as User Experience (UX) design and User Interface (UI) design. The two disciplines certainly overlap somewhat, as they both center on the user and seek to enhance their UX. However, as much as they do, they remain different at their cores. Each requires different skills, focuses on different design elements, and has different conceptual goals. As such, the difference between UX and UI design bears discussion – which we will embark on today.

Why the Difference Between UX and UI Design Matters

Initially, let us briefly define why this exploration bears any significance. Surely, some marketers and designers alike will argue the differences are too minor to matter. This may be partly true, as both are often pieces of the same puzzle. However, the distinction bears a few critical implications, whether you’re looking to hire design professionals or are seeking such a career path yourself.

Defining the Goals of Each

First, as much as the two synergize toward the ultimate goal of enhancing UX, each has different initial goals. Failing to make the distinction among them would differ little from, say, embracing both inbound and outbound marketing indiscriminately because they both ultimately seek to drive conversions. Or adopting CRM solutions regardless of their scope or subset, because all CRMs bolster customer relations.

Secondly, you may be exploring your career options and seeking to hone your skills as regards either. In such cases, it is equally crucial to have solid definitions in hand. Here, failing to note the difference between UX and UI design would only limit your understanding and hamper your efforts.

Finally, should you be recruiting web design professionals, this distinction would allow you to do so more accurately. First, you may use your analytics to deduce which of the two your website underperforms for. Then, you may focus on clients that seek outstanding quality from your website and offer them what it lacks; UX, UI, or a mix of both.

A Brief History of UX and UI

Now, to fully understand the difference between UX and UI design, let us briefly explore their mutual history. Adobe offers an excellent, consolidated version of it that lends valuable context to our discussion.

First, they trace the history of UI “back [to] the 70s, at the dawn of the computer age.” Then, they argue, Command Line Interfaces (CLIs) required notable operator expertise, and complicated interactions between machines and humans. In the 80s, they continue, Xerox PARC developed the first Graphical User Interface (GUI), which Apple’s Macintosh home computer first made a commercial success in 1984. From that point on, they conclude, the computer revolution and GUI popularization paved the way for UI design and optimizations.

As regards UX, however, they note that its history is far more complex, far less defined, and far less digital. Don Norman, co-founder of the Nielsen Norman Group, coined the phrase in the 1990s, when he was working for Apple. He argues, and Adobe agrees, that “UX is everything” that relates to a user’s experience with a company’s service or product:

Thus, UX precedes UI, historically speaking. UX does include UI and digital avenues, but remains far broader in its scope. Still, their histories have intertwined, and the two maintain a substantial overlap – hence the interchangeable use of the terms.

The Similarities Between UX and UI Design

So, briefly outlining their similarities, we may quote Nielsen Norman Group ourselves. Defining UX, they do “distinguish the total user experience from the user interface (UI)”, as we do. However, in the same sentence, they also note that “the UI is obviously an extremely important part of the design”.

So, where exactly do the two overlap?

#1 Both Synergize Toward a Better UX

On their most fundamental level, both enhance UX. Discussing the topic, Jonathan Widawski, CEO at Maze, puts it brilliantly as follows:

It is this exact overlap that both Adobe and NNG also highlight. In essence, UX design offers the bedrock of the user’s overall experience, while UI offers the aesthetics. One cannot thrive without the other, or can only do so minimally.

DesignCourse, using Maze themselves for usability tests, also touch on this subject in the above video.

#2 Both Center on the User

That’s because both, as their names suggest, center on the user. This is not merely conceptual, as both design disciplines seek to fully understand, cater to, and please the end-user. This is why UxDesign accurately identifies user research as “necessary for all stages” of UX, and finds applications of it for both. To prove it, they cite Ken Norton, a partner at Google Ventures and former Product Manager at Google, who also uses the “restaurant analogy” to highlight this:

“UI is the table, chair, plate, glass, and utensils. UX is everything from the food, to the service, parking, lighting, and music.”

Finally, despite the difference between UX and UI design, both ultimately require similar skills. Not identical ones, by all means, but certainly similar ones – especially soft skills. CareerFoundry, exploring why “companies often advertise UX/UI roles as one,” illustrates this point very well in the following infographic: 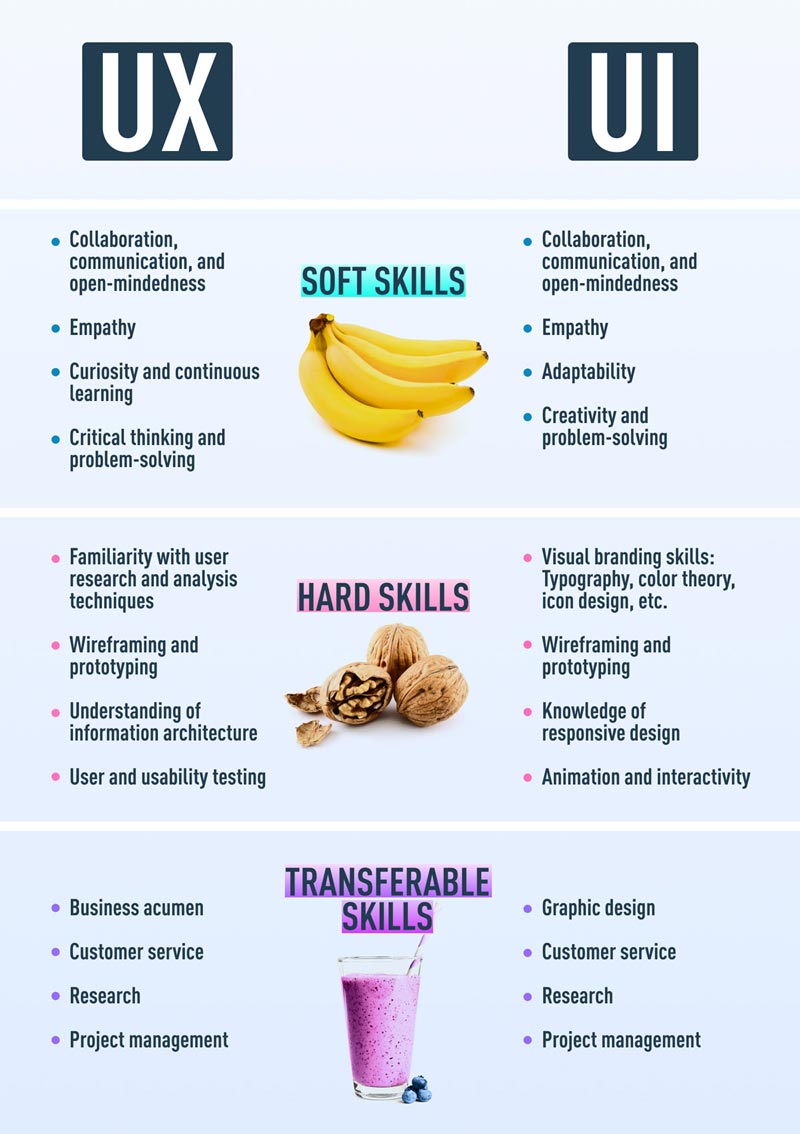 The Difference Between UX and UI Design

All of that said, the difference between UX and UI design still requires attention. Yes, the two overlap, synergize, and share web design tools, and yes, both enhance UX. However, each offers a different career path and requires different hard skills, and each addresses individual, specific end-user problems.

#1 One Builds, One Expands 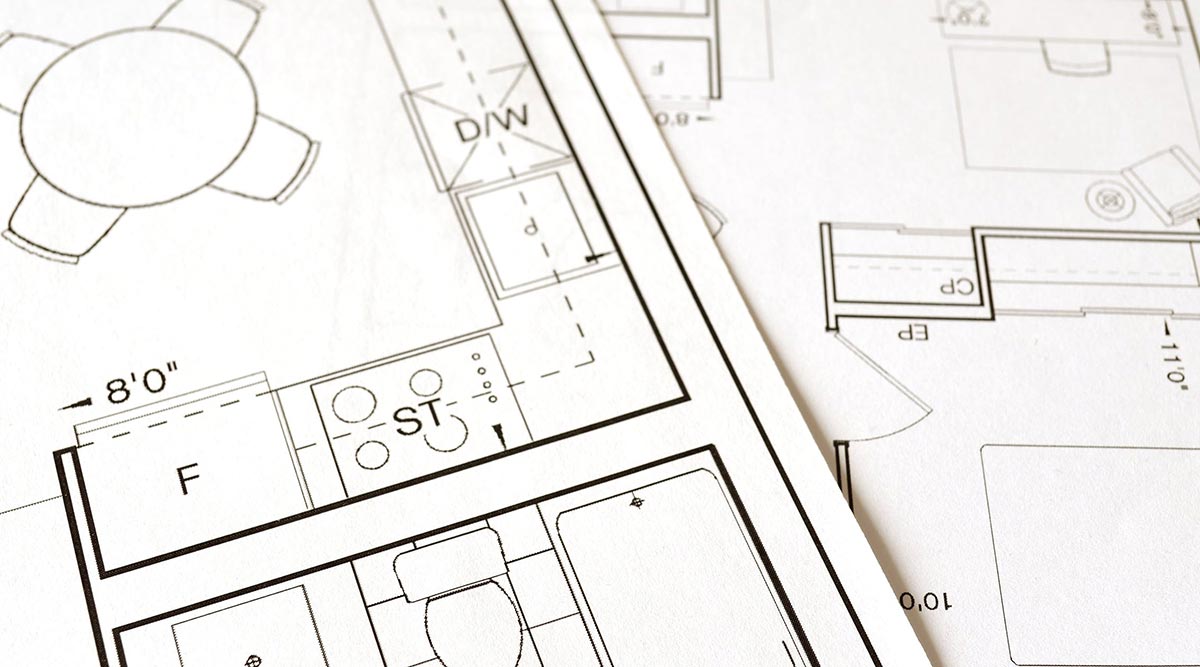 Initially, embracing the analogies of both Jonathan Widawski and Ken Norton, we may assert that UX “builds” while UI “expands”. That is to say, returning to the house analogy, that UX offers the foundation, while UI offers the aesthetics.

Quoting the former again does bear significance here, of course, as he argues against strict, fixed boundaries:

“The roles of UX and UI are being redefined all the time. In three years, the definitions will have shifted from what they are now. It’s not an exact science.”

However, at their fundamental levels, each serves a specific, different purpose. UX addresses the entire experience, while UI caters to accessibility. Both are essential, and their boundaries are negotiable, but this distinction remains crucial.

#2 UX is the Overall Product Experience

To elaborate on why that is, let us cite NNG once more through a different video:

In this video, they maintain Don Norman’s assertion that “UX is everything”. That is to say, UX begins with the end-user’s first interaction and ends with their last. It thus spans across SEO, content marketing, ease of navigation, customer service, and more. One cannot confine this term to interface interactions, or even to digital touchpoints alone.

#3 UI is the Aesthetic Experience 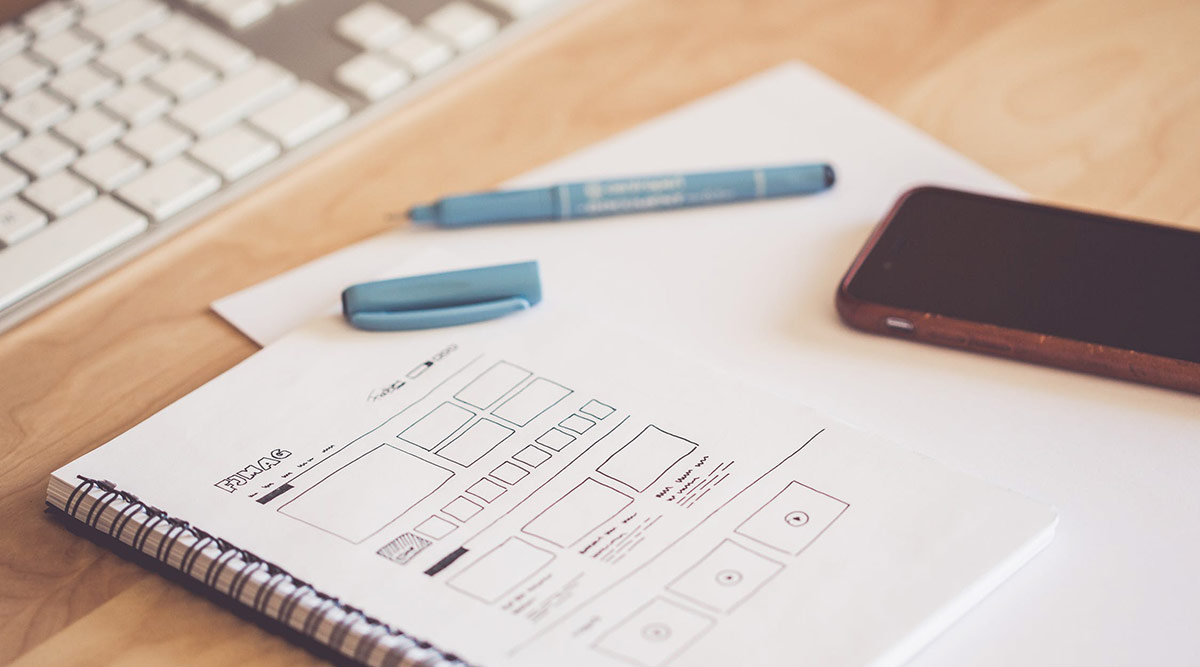 UI does lend itself to more grounded definitions, however. In simple terms, in line with all the aforementioned experts’ views, UI addresses the aesthetics of the experience. It is for this reason why UI caters to Core Web Vitals more carefully, as it focuses on responsiveness and technical health. It overlaps with Landing Page Optimization (LPO) and Conversion Rate Optimization (CRO) more, as it perfects layout and visual appeal.

#4 UI is Strictly Digital, While UX is Holistic 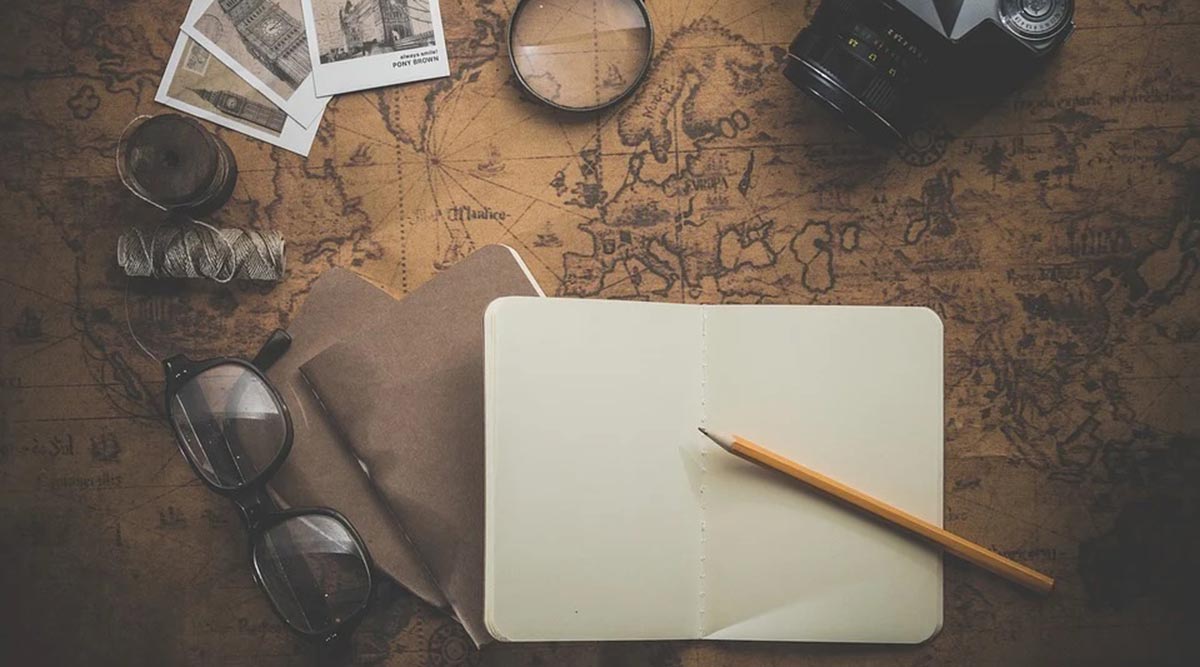 Finally, with all of the above in mind, we may reiterate the fundamental difference between UX and UI design. That is, UI design is strictly digital, and delves into digital pursuits such as UI responsiveness. UX design, on the other hand, is more holistic, and its scope expands to physical touchpoints, traditional marketing, post-sale engagement, and more.

Therefore, UI will ensure optimal end-user interaction with digital touchpoints. UX, on the other hand, will track all interactions across the customer journey, offering a cohesive, pleasant experience

In summary, UX and UI design are by no means competing disciplines. On the contrary, they continue to intertwine over time, as both serve the same ultimate goal. However, they differ in essence, function, and scope, and noting this difference bears significance.

About the Author: Matthew Schwimmer

Matthew Schwimmer is a freelance content creator focusing on a variety of topics. However, he mostly enjoys writing about digital marketing trends, web design, and ways to achieve success online. He loves sharing his knowledge and helping company leaders become the best versions of themselves and bring their online presence to the next level. Since an early age, Matthew has been passionate about computers, and he even learned to write simple programs when he was in elementary school. He loves reading and expanding his knowledge with the aim of producing articles that would be helpful and informative to readers. He follows sports and cheers for his home state team, The Patriots.

Tell Us What You Think About UX and UI Design Differences 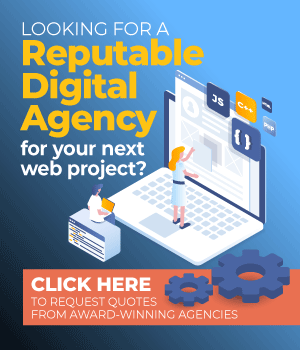